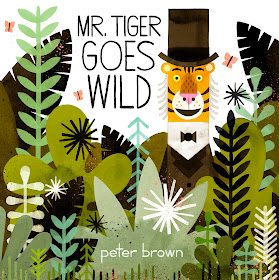 is Peter Brown's newest picture book!  I have become a HUGE Peter Brown fan over the last few years and was very excited to see a new book coming out. Today is the books BIRTHDAY so we are having quite the celebration!

MR. TIGER GOES WILD  has lots of the same characteristics I love about Peter Brown's writing.  A great story with a character you come to love and understand early in the book.  The illustrations invite revisiting over and over and the message is a fun one. This is the story of Mr. Tiger who wants to go a little wild, do something out of the box, get out of his usual routine and have a little fun. Who can't relate to a story like this?

We have all gone wild a bit in our lives. We've done things out of the norm or a little out of our usual comfort zone.  Me? I am pretty much a rule follower--I don't necessarily agree with every rule and I am opinionated and mouthy about those I don't love, but I tend to do what I am supposed to do.  But sometimes what you are supposed to do gets boring and I think we all need to have a little fun by going a little bit wild, just like Mr. Tiger.

As I was preparing for this blog post, I was thinking about times in my life that I've done something a bit out of the norm.  It seems that I have lots of little things throughout my life so I tried to think back to the first experience I could remember of going a bit wild--doing something out of the box.  Lucky for me, I've always had friends who helped me get out of my comfort zone--who had ideas that I never would have attempted or who have gone along with an idea I've thrown out there that I was never actually serious about.  I have out of the box ideas but often just throw them out as a joke. I've always had a friend or two two who see my amusing ideas as real possibilities.

My first experience of a time I "went wild" was in Kindergarten.  It was late in the year in Kindergarten and classroom jobs were posted.  It was my turn to get the milk. Getting the milk was one of the best classroom jobs.  With a friend, you took an empty crate to the school refrigerator in the hallway (very far away from the Kindergarten room) and counted out the milk for snack time.  Each of us had a choice between chocolate and regular each day so the milk helpers were responsible for counting out the correct number of each kind, putting them in the crate and carrying the crate back to the classroom. It was one of the few jobs that took us outside of the classroom.

Well, on this day, I was with one of my more adventurous friends.  And the routines of Kindergarten were getting a little boring.  "Wouldn't it be funny," I thought, "to fill the crate with ALL of the milk in the refrigerator instead of counting only the 12 chocolate and 9 white that we needed for our classroom?"  That would certainly break up the routine and make for a little fun. As soon as I thought the idea out loud, my friend loved it, so we got to work.

As five year-olds, it took a lot of work to get ALL of the milk out of the refrigerator--every last carton. We were so focused on the work of following through with our idea, that I don't think it ever occurred to us in the very long time we were gone, that this might be a bad idea.

But I do remember the look on the teacher's face when she discovered us, me stretching my arm as far as I could, to reach those last few cartons in the refrigerator. When I saw her face, it hit me that this idea was probably not a great one. It was then that I realized for the very first time, that we were probably going to get in big trouble.

But my teacher seemed so flustered that she didn't have time to reprimand us when she found us in the hallway working hard to fit hundreds of cartons of milk into a small crate. Instead she sent us back to the classroom, canceled the milk portion of our snack as it was clearly too late for that, and waited for the day to end.  Her look was not one of anger, but one of relief, disbelief and exhaustion.  No anger at all.  Looking back, I am sure the teacher was alarmed at the two of us being lost and was thrilled that we hadn't run out of the building or something. And I am sure someone had to put the milk back.

I hardly ever got in trouble when I was little. No real reason to.  My parents were very good at understanding me and realizing that most of the naughty things I did were well-intentioned.  And I wouldn't say I got in trouble with the milk either.  But it was clear that I had misbehaved a bit.

This story comes back to me often as a teacher.  As a teacher of elementary children, I know that kids often have ideas that seem fun to them, that do not seem so amusing to me.  My idea was hysterical to the 5-year old me.  I couldn't imagine it wouldn't be hysterical to everyone else. My plan was to bring joy and laughter into the classroom by carrying hundreds of cartons of milk back in.  I think this story comes back to me lots to remind me that often, these kids do something "wild" and it is just them playing and learning how to have a little fun without hurting anyone. I think my teacher's non-angry response was important. She definitely wasn't happy but she kind of got it--no harm done.

And because I'm a rule follower,  I think we all need okay excuses to go out of our comfort zone.  Since Kindergarten, I've planned lots of events that invite people to go a bit wild.  I was Pep Club president in high school and that role allowed me to organize things like Punk Day and other Spirit Days.  I also look for excuses to go a little wild in an okay way.


You will definitely want to get your hands on a copy of this book as soon as you can!  It will be a fabulously fun read aloud for all ages. And I am sure it will be one that is read over and over and over by students. It is one to just enjoy and also one that will naturally lead to lots of discussions--one of being who you are and one of going a little wild sometimes is certainly an okay thing!

And now, for some exciting news on how you can WIN a copy of the book. A Year of Reading has been given 3 copies of Mr. Tiger Goes Wild, courtesy of Little, Brown and Company!  So, if you would like to be considered for one of these 3 prizes, leave a comment on this post sharing a story of a time you've done something a little wild. You can blog about it and leave us the link or you can share the story as a comment.  Winners will be announced on 9/10 so you have a full week to think about this and share!

(Note:  Books cannot be shipped to PO boxes, and will ship to US residents only).

And there is even another chance to win:

Jen at Teach Mentor Texts
Aly at Kid Lit Frenzy
Franki at A Year of Reading
Jen at Reederama
Katherine at Read, Write, Reflect
Laura at LibLaura5
Colby at SharpRead 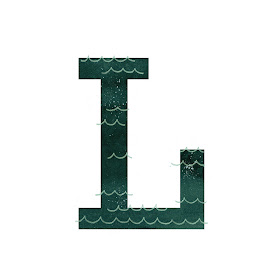 And if you haven't read all of Peter Brown's books, now would be the perfect time to discover their brilliance! A few favorites include The Curious Garden

and YOU WILL BE MY FRIEND! (Starring Lucille Beatrice Bear)

. And don't forget to check out his blog.  If Peter Brown isn't already one of your favorite authors and illustrators, he will be soon! 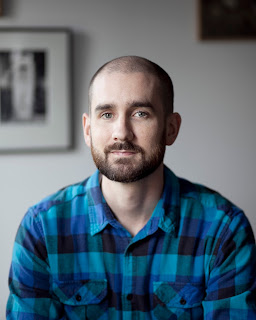 Thanks, Peter Brown, for another amazing book!!